F.From the start, the demeanor and mood of most wedding photos from around the world remained serious and somber. They have generally been devoid of the kind of passion, lust, and notions of romantic love that can be found with most couples getting married today. Even if a particular marriage is not necessarily the result of romantic love and persistent advertising, today the photographs intended to capture the occasion are expected to reflect some attributes of romance, desire, fantasy, etc. When compared to contemporary wedding photography, the same genre of photographs from earlier periods points to an entirely different set of concerns.

Examples from the beginning of wedding photography to the mid or late 1940s generally lack any emotional ease. The main feature banned from the frame in order to achieve this general feeling of displeasure was the smile. The kinesics frozen on the facial expressions and body positions of these historical photographs almost exude a sense of sadness or unhappiness, as if these were the basic attributes symbolized by what the wedding represents.

The attempt seems to have been to give the wedding photo a feeling of exaggerated seriousness and thus expand on how the event should be remembered in the future. In these circumstances, it’s not surprising that early wedding photos look what they do. Interestingly, this structure of emotions seen in wedding photos from around the world appears to be remarkably consistent across geographic, class, national, and cultural boundaries, as if very different cultural frameworks take a decidedly negative stance on public expression of satisfaction or happiness that a smile should often convey.

But the smile wasn’t necessarily a sign of happiness in Victorian culture. As Hirsch (1981) states, if a family wanted to appear happy, they should pose in front of their property. The property in the background of her portraiture or photography would indicate her success and status in the material world and thus the ultimate source of happiness. The smile, if it were on a wedding photo, would have completely changed his mood, which was somehow kept under control until the 1940s.

As a young man, I often wondered why my grandparents looked so unhappy in their 1920s wedding photo. Even so, it seems that compared to other historical photographs of the same genre, my grandmother secretly let the traces of a reluctant smile creep into the frame – without showing her teeth – while my grandfather stuck to the time norm of solemnity. How and why was the smile so confidently excluded from this scheme of things?

The lack of a smile and the emotions that come with it were not limited to just wedding photography. It was something that was commonly seen in photography across genres at the time, which was also adopted by wedding photos as necessary propriety because it made sense given the way marriage was itself understood. Kotchemidova describes this as “invariably serious facial expressions in photos from the 19th century”. The smile in this particular context reflected a broader social concern or taboo. To understand why the smile did not adorn wedding photos, one must also understand why it was also not part of another type of photograph that involved a close examination of human facial expressions. Fabry notes that it wasn’t until the 1920s and 1930s that smiling was considered the “standard expression” in photographs in general (Fabry 2016). In practice, however, it was not more clearly visible until after the 1940s, after the end of World War II.

Angus Trumble, in his book A Brief History of the Smile, suggests that poor dental conditions partially explain why the smile was not seen in 19th century photographs. He follows the development of dental health as an important criterion that enabled the later appearance of the smile in photographs (ibid.). As he notes, “people had lousy teeth, if they had teeth at all that spoke against opening their mouth in social settings” (ibid.). However, this does not mean that people were not smiling at the time. And it is also likely that if bad teeth were the norm, vision with such teeth would have been routine and normalized in most social settings as well. As such, this factor alone does not fully explain the nineteenth and early twentieth century frowns at capturing a smile in a photo.

The inadequacy of technology is also used to explain why the smile is not visible in 19th century photographs. That is, in the early stages of photography, given the longer exposure time in the early cameras, it was necessary to hold a particular pose for a considerable amount of time for the camera to capture it (Fabry 2016). It wasn’t easy to smile too long. As such, it would be natural to adopt simpler poses. Even so, in the 1850s and 1860s, under the right conditions, it was quite possible to take a photo in a few seconds, and in the decades immediately after that, exposure times became even shorter (ibid). It is clear that the technology was available much earlier than we commonly assume to capture a fleeting expression like a smile – when it’s worth capturing. In this sense, the problem seems to be more than a question of problematic dental hygiene and the lack of the technology required, the smile itself, or the norms of the public smile and its importance in etiquette.

Also read: I remember Homai Vyarawalla, a self-taught branding photographer who made her own rules

In relation to Fred Schroeder’s 1998 essay “Say Cheese! Kotchemidova, the revolution in smile aesthetics, offers a cultural explanation that goes beyond the concerns of dental hygiene and technology to explain the lack of smile in early photographs. She notes that the standard expression in early group photos and portraits mimicked the established practices of European portraiture, which generally depicted solemn faces “occasionally softened by a Mona Lisa curve of the lips” (ibid .: 2). So the smile was not a norm when the self and its significant other were captured for posterity in paintings or early photographs. Instead, it was an occasional or even random event. This is because “in the fine arts, grins were only characteristic of peasants, drunks, children, and morons, suggesting a low class or some other deficiency” (ibid.). Within these conventions, smiling was clearly a sign of low social status or an issue of rudeness. And such a feature was obviously not worthy of posterity.

Applying the conventions of portraiture to photography, this class-based sense of solemnity was blindly simulated in the construction of a person’s likeness. These conventions, originally intended for portraiture, were seen as the ideal form of behavior when a person was in front of the camera. In addition, general standards of beauty in the late nineteenth century privileged a small mouth, which would also be questioned if a smile intruded into this somber cultural repertoire (ibid.). So it was not surprising that the first photo studio, founded in London in 1841, adopted the “language” of “saying plums” to help those seated form a small mouth without a smile (ibid).

To some extent, this general mood and lack of smiles also comes from the conventional way in which marriage as an institution and marriage as a societal vehicle that initiates the institutional principles that marriage implies have been conventionally understood. Adshade and Kaiser state that “the formalization of the family structure through marriage creates an important economic and social institution for the distribution of resources and for the production of consumer goods and children”. In this scheme of things, marriage formally brought men and women together, “in genetic reproduction and household production” (ibid .: 2). As suggested by Rose, the “home” created by a socially sanctioned union should be turned into a cleaned, cleaned, moralized domestic space. It should take over the moral education of its children. In addition, it was expected that it would domesticate and familiarize the dangerous passions of adults, tear them out of the public vice, the gin palace and the amusement arcade, and be responsible to each other, at home and towards children, to want to improve their own condition ”( ibid.).

In the sense described above, the smile in wedding photos that we take for granted today, as well as photography in general, is a norm that is more rooted in our time than in the first ninety years of photography history. Because of this, most people naturally assume in this day and age that the smile is a generic ingredient in such photographs, unrelated to time. 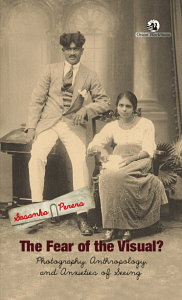 This excerpt from The fear of the visual? by Sasanka Perera was published with permission from Orient BlackSwan.

Why news media is in crisis and how to fix it

But the news media is in a crisis of its own. There were brutal layoffs and wage cuts. The best of journalism is shrinking and making a gross spectacle in prime time.

ThePrint has the best young reporters, columnists, and editors to work for it. To maintain journalism of this quality, smart, thinking people like you have to pay for it. Whether you live in India or overseas, you can do it here.

Covid is once more taking a toll on the marriage enterprise

Romantic journeys and honeymoons with One & Solely