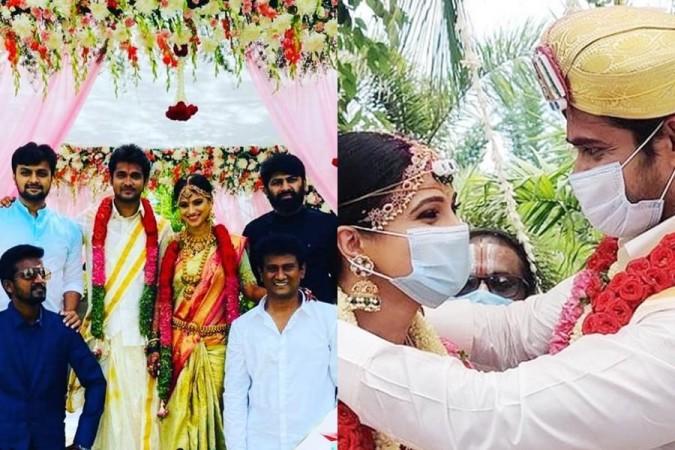 The vaccine shortage continues, Karnataka officially suspends the Vax drive for the 18- to 44-year-old age group

The famous sandalwood couple Chandan Kumar and Kavitha Gowda tied the knot on Friday May 14th at an inconspicuous event in Bengaluru. Due to lockdown restrictions, the actors married in the presence of limited guests.

Here is the first picture of the wedding of Chandan Kumar and Kavitha Gowda.Instagram

According to Chandan Kumar, the couple wanted to get married in the presence of all their friends, relatives and well-wishers, but the lockdown forced them to change their plans. So the marriage was adorned by limited guests and a few celebrities, including Bigg Boss Kannada’s season 4 runner-up Keerthi Kumar aka Kirik Keerthi and Bigg Boss Kannada 7’s contestant Chaitra Vasudevan.

The couple had officially shared the news of their marriage on their social media accounts. In the first photo they published, the couple can be seen tying the knot and wearing masks.

In April, Chandan and Kavitha got engaged. They have known each other for eight years. The couple had starred in the Lakshmi Baramma series.

They have remained good friends for years, despite rumors about their affair. Even when questions about their relationship surfaced, the actors stated that they were just “good friends”.

Love in the times of Corona
Chandan Kumar spoke to a daily newspaper and said that they fell in love last year. “We’re taking our relationship to the next level with a simple engagement ceremony. It’s an exciting period in life for both of us. I met Kavitha about eight years ago on the set of Lakshmi Baramma. We’ve been very good friends ever since.”

After the curfew, when we started trekking with a group of friends, we learned that we were made for one another and our friendship blossomed in love. The wedding takes place in May. We still have to set the date. “He is quoted by The Times of India.

Assessing the Weddings and Honeymoons Market

Win a dream bundle for a marriage anniversary at Lough Rynn Fort Property and...